Tomorrow (Sunday) is voting day here in Hong Kong. On and off for the past two weeks or so, we have seen the candidates out on the street. And I mean out on the street. The first time we saw Joseph Chan, we were in a taxi going up the hill to where we live and there was this lone figure standing on a corner next to a billboard of himself waving at the cars going by. We were quite surprised and quite amused. Not something we had seen before but as the days went by he would pop up in different places with a fixed smile on his face, a shash over his shoulder waving at the passers by. Occasionally we would also see his opposition. This seems to be the norm here or I think it is. Tonight he was out with his entourage. It's not the best photo because we were in a moving taxi but definitely newsworthy. Joseph Chan is standing on the far right. 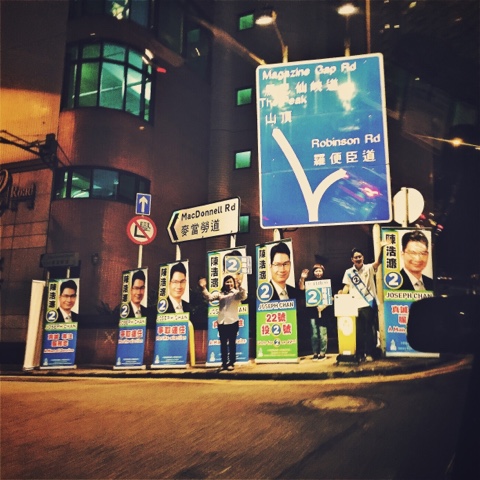