Sometimes the background in a photograph is not worth patching up in a traditional way.  I decided in the photograph below to 'cut out' the little girl and put her on a separate layer so I could more freely clean up the bottom layer. When I made the selection, I refined the edges by setting the smooth to about 30 and feathered edge to about 20 so that the cut-out would blend back into the picture.

I added the colours on separate layers too so that I could change them if I wanted. 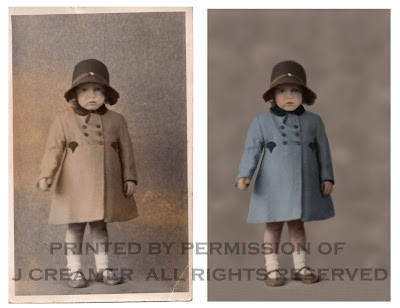 The little girl's face was a bit tricky as it was quite blemished. I reconstructed the nose by copying the left side and flipping it horizontally. Once I had done a lot of cleaning on the face, I used the smudge tool as well with a strength of 55%. The face is not perfect but then it is supposed to be an old photograph anyway.
Posted by Ann at Tuesday, May 03, 2011