One of the highlights of our trip to Singapore was a visit to the Singapore Botanic Gardens.  In the centre of the gardens there is an orchid garden which I just loved.  An orchid is the national flower of Singapore.

The theme for Photo Art Friday was paths so I thought I would use the overhanging pathways in the gardens plus the orchids to create a collage: 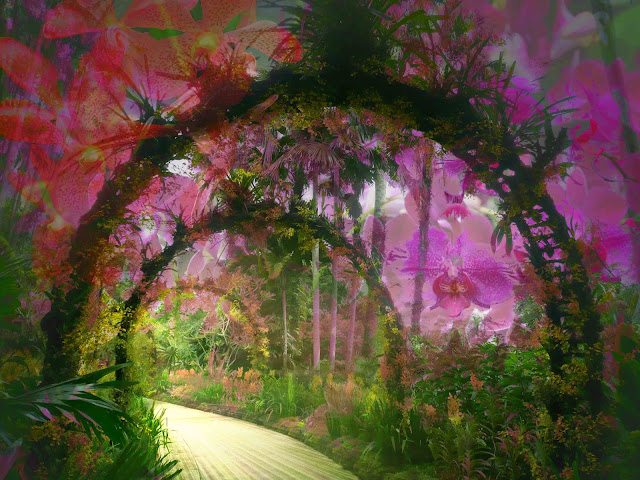 However, this next collage which I put together using one of the statues in the garden is my favourite: 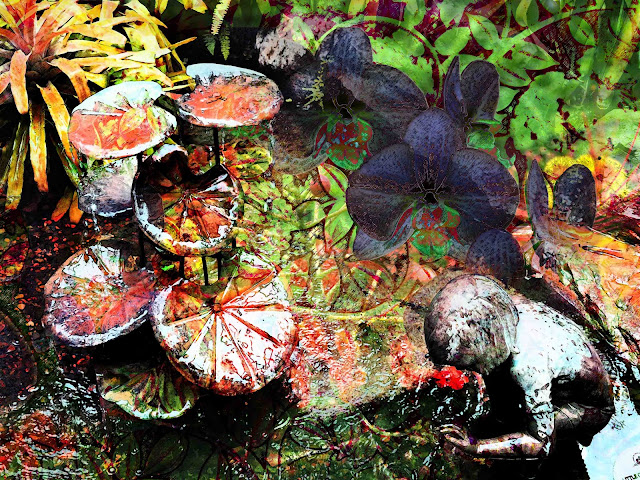 I have come back from my holiday in Singapore and Thailand absolutely bubbling with inspiration.  Just what I needed to get me going again.  I took 700+ pictures with my point-and-click and my husband took over 1000 with the DSLR.  Happy Days!

When I was in Singapore the Asian Civilisations Museum was holding an exhibition called Patterns of Trade: Indian Textiles for Export, 1400-1900. How lucky was that?? 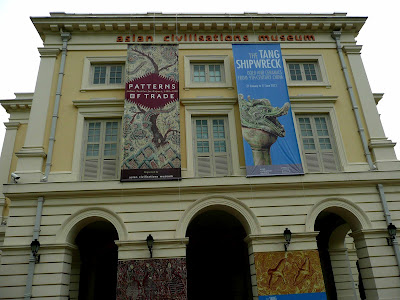 I was allowed to take pictures as long as I didn't use a flash and I took loads of pictures of the wonderful patterns to use as inspiration.  There was a video playing showing the way the Indians use the large wooden printing blocks and the level of accuracy with the repeating prints is astonishing.  Found the history of printing fascinating too.  The exhibition is on until June.
Posted by Ann at Thursday, March 29, 2012 No comments:

Email ThisBlogThis!Share to TwitterShare to FacebookShare to Pinterest
Labels: Singapore

The beauty about going on holiday to a location which is entirely different to one's own is that you learn and see things which you wouldn't normally.

An art form which I had never seen before and which is practiced in Thailand is soap carving.  I bought this exquisite flower carved from soap which was presented in a beautifully painted lacquer container from a Thai lady who showed me how she carved the soap. 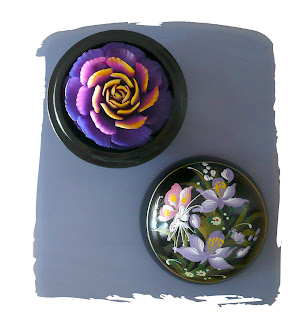 As soon as I got home I couldn't resist extracting the flower and seeing what I could do with it.  From one art form to another: 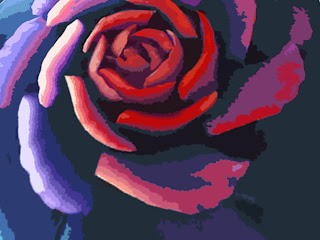 Big in Thailand is also fruit and vegtable carving:
Check this out: http://www.jmcreativedesigns.com/Vegetable%20Fruit%20Carvings.htm

I also discovered after some digging around that the Thais are not the only people to carve soap:
http://www.dimidumo.be/Lester%20Gaba%20text%203.htm
Posted by Ann at Wednesday, March 28, 2012 No comments:

I have to say that out of all the phone apps, Sketchbook Mobile was the best and one that I might use in the future if I want to fill in a spare moment.

However, phone apps are so fiddly to use and they do take some time to master, that I think if you are in a coffee shop with time to spare pull out a piece of paper and just start doodling and then scan it in later or photograph it.  Sometimes there's nothing to beat just drawing with a pencil.  My doodles are all more artistic and free flowing/thinking when draw with a pencil rather than trying to churn out something on a phone.

Here is a collage from pictures taken in Thailand to represent the tao of drawing! 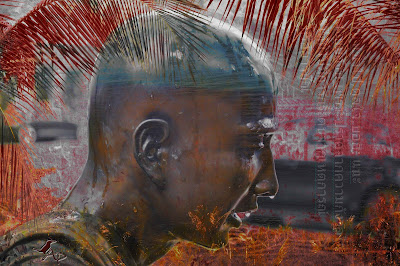 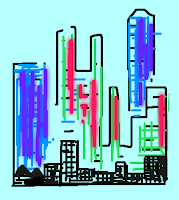 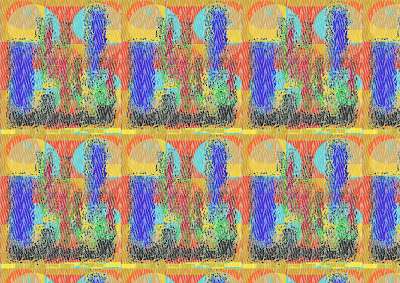 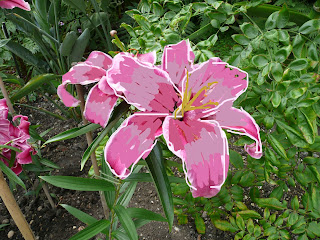 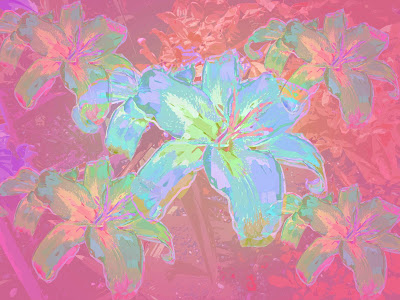 I'm always trying to see if I can digitally mimic art done by hand and my intention was to try and mimic stamped cards.  However, as so often happens, I make a discovery in the process and end up doing something completely different.  So in the process of using some vintage images, this is what I got.  Again, not sure which one I like best: 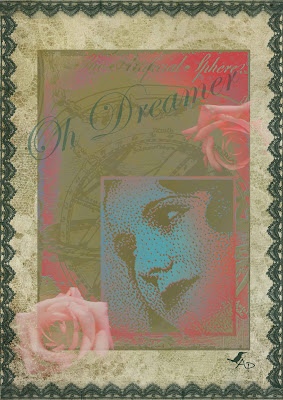 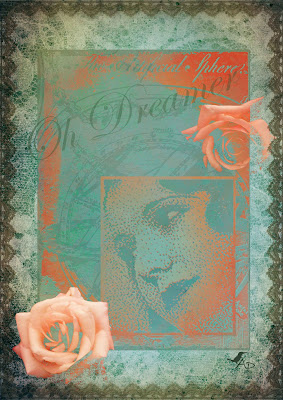 Completion of the Ginger Cat

I took the picture of the ginger cat and combined it with the original photograph (with the cut-out filter applied to it).  I then tried blending a couple of textures and came up with 2 that I liked the best.  The first one looks like an old postcard and the second one, a picture from an old book. 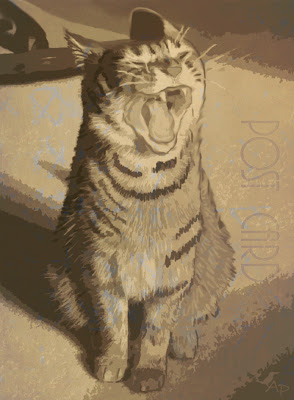 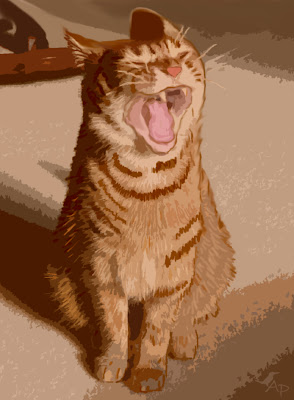 Well, this is really the same as my post about drawing app No. 2 but it's the bought app and not the free app.  I am slowly getting used to Autodesk Sketchbook Mobile and I can tell you it's pretty addictive.  I struggle with the size of the drawing but when I zoom in I lose the perspective so I decided to trace over one of my photographs - I saw this being done on a youtube video.  This is much easier and I think there is quite I lot I can do with this.  Below is the result.  I am going to take it into PSE and see what I can do with it. 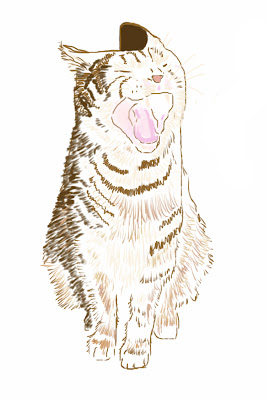 The next app I tried on the Android is the free version of DScribble.  To be honest, I thought it was too limited.  Also, you couldn't save it on the phone - it had to be uploaded to the internet visible to everybody. This would be no use if I was on a flight. Besides, I could do a lot more and the same in Sketchbook.  I did a lot of very basic scribbles knowing that I would use them for brushes:

I came up with this pattern in Photoshop Elements after I converted the scribbles to brushes and patterns.  Not sure what I will do with what I made but who knows. 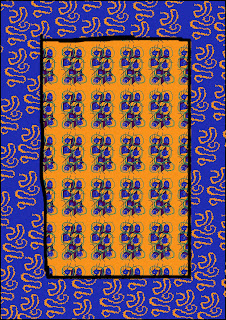 I quite liked the 'barbed wire' squiggle and will probably incorporate this into future art. What I have to remember is the whole point of putting something on my phone is that I can create when I am on the go and just the simplest of doodles can have a great outcome.
Posted by Ann at Sunday, March 04, 2012 No comments:

Sitting in a coffee shop or just waiting somewhere, I feel that I should be doing something and now that I have acquired an Android phone, I feel that I should put it to good use.  I have seen some of the wonderful stuff that artists have done on their phones and decided to have a go at finding a drawing application that might add to the photo manipulation that I do.  I started off with the free version of Autodesk Sketchbook Mobile which is one of the best known. 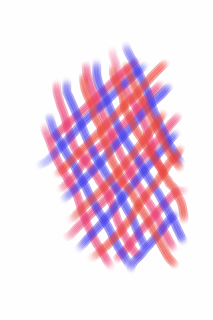 And produced this in Photoshop Elements with a lot of blending and camouflage!